Arsenic poisoning is found in 59 out of the country's 64 districts, writes Shahidul Azam 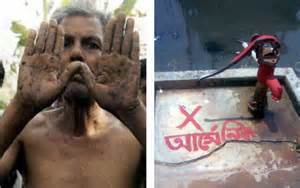 THE appalling scenario of the country has been reflected in a recent survey, which says that arsenic poisoning is found in 59 districts out of 64 districts. Experts have also expressed concern that the tubewell water of Dhaka is not free from arsenic poisoning. Water samples of different tubewells are being tested at the laboratories of BCSIR.

The problem began in 1975. The Farakka Barrage, that had caused fall in the water levels of various rivers in Bangladesh, is said to be the main reason behind the problem. As a result, people in general have become solely dependent on the underground water. Dependency on tubewell water would continue to exist if arsenic poisoning was not detected in tubewell waters.

Villagers, however, finding no other option, have been taking the contaminated water of the tubewells. Meanwhile, different bodies, including the government agencies and NGOs, have been working in a scattered way to make the water of the contaminated tubewells free from poisoning. Different teams of experts have been working in some areas, where arsenic-contaminated tubewells have been marked with red colour while the arsenic-free ones with green mark. But the practical scenario is not very pleasant. Detection of arsenic contamination could be made possible only in 1.12 million of the total four million tubewells.

More persons would be affected by the poisoning before the completion of the testing in arsenic contamination. Whatever the situation may be, the main target of such testing is to prevent people from taking contaminated water of such tubewells. Practically, people have been using the water of tubewells in various purposes, apart from drinking. People cannot opt for the water of ponds and rivers as most of the waterbodies are dried up in the summer. The situation has worsened following recent changes in the country's environment. The country experiences drought in most part of the year. Farmers use underground water for irrigation in the crop field.

Usually, an arsenic-affected person suffers from skin diseases. In some cases, mutilation of flesh of hands and legs develops. Childbearing mothers face manifold problems, including natural-abortion and delivery of under-weight babies. Meanwhile, many mothers have been affected by arsenic-poisoning in Barisal, Madaripur and Laxmipur areas, said a survey report which, however, said children of the northern districts are the worst victims of arsenic poisoning. Children as such, initially, suffer from eye-problems, and skin and intestinal diseases. Diseases caused by arsenic poisoning have been increasing rapidly and becoming fatal for the affected persons. A national daily reported that a large number of babies have died of arsenic poisoning in northern districts. Mahmudur Rahman of Dhaka Community Hospital said children comprise 40 per cent of the total arsenic-victims. Rahman further said the children of rural areas, where people are not well aware of the contamination, are being affected by taking arsenic-contaminated water. "However, the situation is not alarming," Rahman said, adding that it can be contained by proper diagnosis and treatment where necessary.

Arsenic poisoning not only causes different diseases, it also creates social problem. It is alleged that some superstitious people consider the arsenic contamination as the curse from God. So they avoid mixing with such neighbours, including the children, where arsenic-contaminated tubewells have been detected. Moreover, arsenic-affected women face problems in conjugal life too, it is alleged. A sad-story of a girl named Ranu has recently been reflected in a report published by the Daily Star. She told a reporter that all her classmates have apparently boycotted her. "They do not talk with me, they do not mix with me and even they do not sit on my bench," Ranu regretted.

Bangladesh, which faces manifold problems, is yet to ensure Health For All. The number of doctors is also insufficient to serve the people of the densely populated country where rural people still believe that a Kaviraj (rural doctor who treats patients by herbal medicine) can cure them from the disease. Moreover, medicines for arsenic-related diseases are not available in rural areas. As a result, arsenic-affected people are to pass their days without any proper treatment.

Allen Smith of California University said that arsenic contamination has been identified as one of the reasons of cancer. "In some cases, arsenic poisoning is more dangerous than smoking," Smith said, adding that it will come true soon in case of Bangladesh.